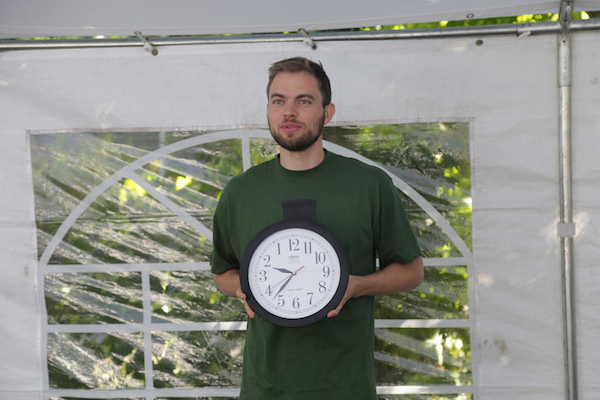 As we approach the first anniversary for the Comedy of Things (CoT) workshop, I feel compelled to share some of the ways in which the event has informed and, in a very practical sense, affected my own work. While there surely are facets and insights from the workshop that have yet to dawn on me, there is one concept in particular that I associate clearly with CoT: Anthropological experiments.

Let me clarify what I mean by this in relation to CoT and how I think this concept can be applied elsewhere.

Out of the Box

During our four-day workshop at Helenekilde we engaged in highly creative, freethinking yet timely and materially constrained exercises. While this was certainly an ‘experimental’ mode of working, it is rather the final output that informs my work-in-progress understanding of anthropological experiments. The result of our collective effort in group 1 was an installation piece entitled “Out of the Box”. In it we had attached seemingly recognizable objects (a cigarette bud, a clock, a space helmet, a scarf, nail polish and so on); metonymical objects loaded with contextual meaning from our different backgrounds. Once at the museum the idea was for audiences to interact with the installation and unveil (literally) these meaningful objects but in a new context of mythical creation in which the significance of the objects would, or so we hypothesized, reveal itself anew with each individual visitor creating his or her own narrative of the cosmological function of these objects. However, at the time we were not able to observe audience responses to our installation in order to comprehend, retrospectively, what we had actually created with “Out of the Box”. Nonetheless, I came to think of CoT as an endeavor to explore the elusive ways of experimentally derived, anthropological knowledge-production characterized precisely by this continuous meaning making in which ethnographic data reads itself through itself, so to speak.

Thinking the experiment beyond CoT

Might it be possible, then, to front-load (borrowing a term from philosopher Shaun Gallagher) not only objects, but also ethnographic phenomena in which meaning is defined depending on the socio-cultural context as informed by fieldwork yet open to novel interpretation in a completely different setting? Might it be possible re-position sensorial and affective experience into an exhibition in which audiences can re-create a foreign phenomenon albeit in a simulated way and thus imbue it with their own understanding particular to the social and cultural context in which they live? What kind of comparison would we end up with and would it be anthropologically relevant at all? Furthermore, what if the audiences where informants dictating their own analytical premises by engaging with the ethnography through the installation and in dialogue with the anthropologist?

These questions lead to the realization of Spirit Places//Åndesteder at Moesgaard Museum in Aarhus, Denmark, between March 16 and May 26, 2015. The exhibition was an integral part of my research into global Charismatic and Pentecostal Christianity and, as such, a comparative experiment in which Danish Charismatic Christians along with Ghanaians living in Denmark would engage in conversations with each other and me about faith, spirits, materiality, representation, and missionary Christianity in relation to the cultural and socio-economic contexts of Denmark and Ghana respectively. It was an anthropological experiment hypothetically informed by (1) an ethnographic phenomenon (the presence and expansion of religious communities in Southern Ghana is largely conditioned upon struggles to dominate social space through sound and visual expressions), which was then (2) re-positioned through material representations and simulated interaction into a Danish ‘lab’ setting (the museum) where (3) observation, questionnaires, and ‘comparative dialogue,’ as I call it, made it possible to extract analytical insights from audience responses to re-read my fieldwork from Ghana and gain understanding of the comparative dynamics between faith-based communities and their social and cultural context.

Originally, Spirit Places, which was done in collaboration with Ghanaian art photographer, Nii Obodai, was supposed to be exhibited in Ghana after the initial responses from audiences in Denmark and thereby function as a kind of cross-cultural conversation between Christians in Denmark and Ghana about the function and position of Christianity in modern societies that face different societal problems. However, due to lack of funding the exhibition never moved to Ghana. Instead, we created an online platform for the exhibition (not unlike this site) in which Ghanaians, Danes and others can take a virtual tour through the exhibition, get a deeper background understanding of the project, and, most importantly, engage in an online dialogue about the themes of the exhibition (you can access the website for a full description of the exhibition here: www.spiritplaces.dk)

Designed as an experiment, Spirit Places sought to isolate two variables of Ghanaian Charismatic Christianity as basis for comparison: (1) the European missionaries and (2) the traditional Ghanaian world-view of spiritual presence in people’s day-to-day lives. Isolating these two variables in sections 1 and 2 was necessary to have audiences engage in a comprehensive way with section 3 of the exhibition, which was divided into four installations and depicted scenes from Accra, the capital of Ghana, where the notable presence of Charismatic Christians can be seen as the synthesis between the two previous sections. In each installation there was a pair of headphones in which Ghanaians talked about their Christian worldview in relation to the practices shown in the images. Additionally, in each installation there was also a button that, when pushed, would activate a set of loudspeakers with recordings of the scenes depicted. In effect, whenever a visitor pushed the loudspeaker, he or she would activate that particular space (say, a prayer meeting, a preaching in a bus, or an exorcism). If other visitors did the same in the other installations, a cacophony of Charismatic Christian sounds would fill up the exhibition room (with the traditional drums from section 2 constantly in the background). Thus interacting in the exhibition, audience members created an audio simulation of the presence of Charismatic Christians in Accra through sound. In addition, we attached small analogic counters disguised as on/off buttons that audiences could push if they wanted to turn off the sounds in the other installations and thereby dominate other people’s spaces through sound (the ethnographic phenomenon from Southern Ghana). The counters, however, did not turn off the sound but merely counted how many people actually pushed them.

I collected data from the experiment in three stages: (1) observing audiences interacting in the exhibition, (2) using questionnaires of audiences’ experiences and comments on the exhibition, (3) conducting tours and subsequent in-depth interviews, the so-called comparative dialogues, with groups of Charismatic Christian Danes and Ghanaians living in Denmark as well as non-Christian Danes.

I will leave it for my forthcoming dissertation to go into detail with the many ways in which audiences helped to reformulate my initial understanding of both my ethnographic material from Ghana as well as the exhibition itself as a comparative experiment. For now it suffices to say that the audience feedback consistently emerged from the failure of the exhibition to predict how audiences would interact with the exhibition. For instance, while there were many attempts at turning off the sounds (as indicated by the counters), observation revealed that people were rather trying to turn off the sounds that they themselves had activated. In terms of the questionnaires, most were filled out by young people (from seven to fifteen years of age) and many of those were not answers to the questions but rather objections to the project and the media through which I communicated (images, sound, and objects) by drawing genitals, calling me an idiot and so on. Most thought provoking, however, were the interviews with groups of Danes and Ghanaians because they turned my attention to analytical blind spots in the exhibition that I had not considered relevant. These are insights that have emerged through the exhibition and could not have been predicted beforehand as they are a result of the situated knowledge and beliefs of the people I invited to come and their view of my analytical understanding of Christianity and spiritual belief in Ghana.

This work is ongoing and my thoughts above on the anthropological experiment are meant as preliminary sketches to be discussed and clarified further in the future. But to clarify why I think we should take this notion of anthropological experimentation seriously, it is is primarily because of the generative nature of knowledge-production inherent in this type of research. While the concept of the anthropological experiment certainly borrows from other conceptualizations of experiments in terms of hypotheses and unrealistic simulation (see, for instance, Nancy Cartwright’s paper on experimentation), the crucial difference, and one which emerged through the CoT workshop, is the ‘ping-pong’ nature of the experiment in which people themselves retrospectively inform the experiment by loading the material on display with their personal and idiosyncratic knowledge regardless of how these might otherwise go against or problematize the original ethnographic meanings.

This is not to say that we should abandon our insights from neither fieldwork nor our informants’ perspective outside of the experiment. It is rather the opposite. The anthropological experiment as a comparative exercise is a methodological and analytical tool that allows us to expand our knowledge by engaging various perspectives and understandings (however imaginative and biased) in relation to our fieldwork and, as such, it functions as a dialogue between informants and anthropologist about the appropriate analytical concepts. With this in mind I should note from experience that to engage in this type of anthropological experimentation is also, in some sense, to open up a Pandora’s box of biased interests and ethical questions. While such issues remain extremely difficult and elusive, my point is, however, that they are not issues that emerge because of the exhibition but rather they are made visible through it. The anthropological experiment confronts us with hard problems inherent, I think, to ethnographic inquiry and, what is more, it lets our informants articulate their opinions to these matters as part of the process of creating and communicating anthropological knowledge to people outside of academia.

A process-related experiment in three-steps