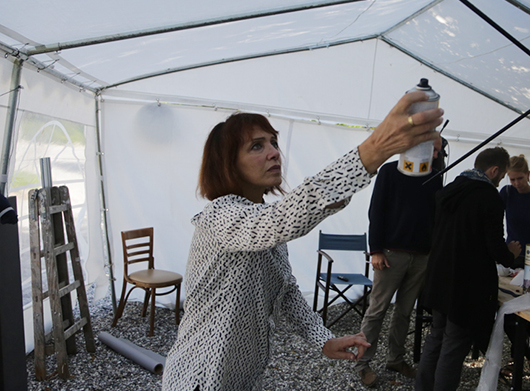 I arrived at the project on a leap of faith – basically, that an ethnographic experiment that could, perchance, become an event.

When I left the project grounds, I had not a nanosecond of doubt that an event had indeed occurred, at least to my way of thinking – though in two competing senses.

First off, I was prepared by the organizers’ invitaton for the radical rupture of the workshop from ethnography taken as tacking between field and representation – the space of writing something up, for example, or taking a film to its final cut.

But I was surprised by the affective intensity of the experience of making the break.

This fact raised for me the worrying possibility that my unconscious mind is more Christian than I’d realized. It so happened that I’d been reading Zizek’s Event (2014), which at one point enters into a distinction between Christ’s “’good news’ of a radical break . . . event as rupture in the normal run of things”, and the Socratic concept of event that stands for remembrance – “for rediscovering the higher reality of Ideas which are always already in us” (emphasis mine).

Asked to comment “afterwards” – as if we’d left this event behind when we left the physical site, along with the ideas we’d come with and the ones born of collaboration – was something I couldn’t quite make sense of. So, I immediately forgot about the organizers’ post-op request to think back on the experiment and to comment on it. Of course, this half-willed forgetting broke the First Commandment of faith in the Creative Commons, namely, to act in the spirit of the common good. Instead, I had selfishly embraced my inner abductee.

Now, any abductee will tell you that it takes time and intellectual labor, not to mention a will and a little help from one’s friends, to recollect (as distinct from remembering) an abduction experience – whether rapturous or traumatic. Remembrance that refers to a collaborative event is another order of work than recollection entirely, a project “always already” a rupture from the specialness of anyone’s experience. It cannot avoid speaking or anyway thinking for others.

So much for Zizek. The event had already collapsed in on at least one category distinction before I’d finished reading Event.

This returned me to the more familiar realm of ethnography, which I took to be the object an experiment to, on one level, configure itself as an installation of its own project – an encounter literally and figuratively at a remove from the particularity of the texts and materials and ideas we’d brought with us for working out from, as particular histories. If there were a problem, it would be along the lines of what might interfere with installation ethnography optioning itself to the comparative project more generally speaking, other than as an object of socioaesthetic controversy: Whatever else, this could not be ethnography for ethnography’s sake just at the moment it had come face to face with its actants’ differing capacities to do and to undo the ethnographic project’s future in “comparative relativism” (as Jensen figures this). It could not stop with its surprise-in-recollection, such as what I’m attempting to relate here.

CoT could only be reproducible as its own laugh.

This seems so obvious to me now. By no accident transported to hotel space apart from our Ordinary Worlds, one could no more deny the nature of our collective’s knowledge and productivities as shaped in the de/construction of ideas and materials sacred to anthropological productivity, than as owing to experiential immersion in the confounding “being there” moment of the experiment’s abductive liminality. In this sense, the “meeting of the heterogeneous” as Ranciere puts it, expressed a meta-relational challenge, namely, to go beyond cultural entification and entity relations (human and nonhuman), in order to examine those relations’ relation to the realm of the senses: North Sea plunges during work breaks and breaks taken (or refused) for teatime Danish cakes: in effect, to examine the negotiations of the CoT program (in the strict sense of the term) relation to all that exceeded it, spatially and temporally, materially and conceptually.

It now appeared that fundamentally, CoT had charged itself to laugh collectively and also contagiously: to create conditions of possibility for contracting-while-releasing persons and things, thereby aerating installation ethnography’s future.

Which is how our working group (which was Group 1) must have come to its “Out of the Box” assemblage: an artifactual cosmos floated as a laughably serious invitation to engage with the thing in a still-open future. As all ontologies do, this one would require particular kinds of aerative negotiations for it to see the light of day – diplomatic releases from idea-locks, unscheduled breathing spaces, cigarette breaks, technological and affective irritabilities (as Antunes Almeida and I have explored this), and so forth. It would need to embrace to some degree the exposure of its distinctively emergent “attitude toward reality” – as Zizek (yes, I couldn’t leave him behind) defines technology (emphasis his) – to the risk of translation, and furthermore, to alteration beyond recognition by its sources. (However good it is, the CoT website brings us up against the evidence of this effect.)

Gratefully, then, I accept that the project all along was at least to some extent for claiming installation ethnography’s distinctive capacity to aerate new ethnographic zones of exchange elsewhere, elsewhen, and in the terms of other beings – gelotologically.

Whether or not we, or they, think of ethnography as a laughing matter.