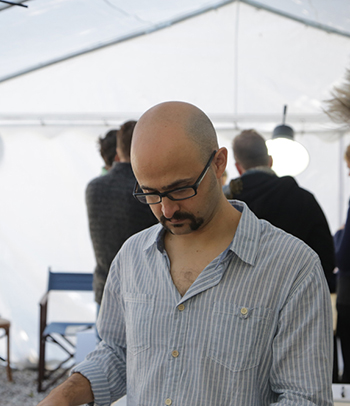 We were the Guinea pigs. The neutrinos. The Higgs bosons. We were theorized upon, modelled, desired. We were called forth into existence. We were experimented into the world.

In their masterpiece on the life of experiment Leviathan and the air pump, Steve Shapin and Simon Schaffer described Robert Boyle’s ingenuity in designing and setting-up the conditions for experimental work in 17th century England. Three technologies were involved in the production and validation of experimental facts: material, literary, and social.

The material space of experiment (the instrumental equipment, the paraphernalia and architectural environment of experiment, Boyle’s very own house) was all-important in centering the discussions to be have. It helped locate the extent and reach of controversy. Experimental facts occurred somewhere, and debate over them should remain circumscribed to that material space.

Experiments further required a particular technology of reportage: a language of description, a “naked way of writing” (69) that was theoretically innocent and capable of attesting to matters of fact rather than opinion. The genre of experimental writing should display humility, demonstrating the author’s standing as a disinterested observer, a voice whose testimony was reliable.

Last, the life of experiment necessitated a community of witnesses wherein matters of fact could circulate and obtain validation. It is well known that the community of such witnesses was first restricted to Boyle’s circle of genteel acquaintances and friends. The social standing of a witness was a sine qua non of his trustworthiness, of his credibility and hence ability for divulging and lending authority to the results of experiment. Over the years, witnesses were recruited virtually, through the networks of correspondence maintained by Henry Oldenburg at the Royal Society (which in time would supply the epistolary material for the Philosophical Transactions).

Experimental arrangements have changed quite a bit since the time of Boyle. Notwithstanding, historians of science have shown us the continued importance of material, literary and social technologies for the work of experimentation (e.g. Peter Galison’s How experiments end or Hans-Jörg Rheinberger’s Towards a history of epistemic things). Moreover, today we find “epistemic cultures” of experimentation, as Karen Knorr-Cetina calls them, that work hard at opening spaces for playing, distorting and challenging the ontological and epistemological dimensions of the material, literary and social technologies that underwrite the lives of experiment

The Boylean Experiment and the Anthropological Prototype

The experimental conditions were indeed carefully planned and executed. The material, literary and social technologies were thoughtfully crafted to test the conventional limits of academic exchange (seminars, workshops, conferences) and its taken-for-granted outputs (papers, articles). We were spatially and temporally manipulated, and asked to manipulate our own spatial, temporal and material trajectories / biographies.

The Comedy of Things website provides abundant information on such an experimental design and layout. Moreover, it frames the experiment in terms of its desideratum and dramaturgy – the associational flights of comedy – and its machinations and energetics – the material enchantments of installation art.

As originally conceived by its organizers, then, the Comedy of Things lines up nicely with the Boylean tradition of experimentation. It laid out material, literary and social resources with which to experiment (upon ourselves); it imposed spatial and temporal rhythms on the execution of experiment, and invested strategically on designing an environment that was at once under-determining, yet simultaneously expecting, output.

The Comedy of Things thus functioned as an anthropological (version of a Boylean) experiment.

Yet I want to suggest here that some of the things that happened at the Comedy of Things laid out the grounds for thinking of it as an experiment outside the Boylean tradition – a tentative assay, perhaps, of an anthropological experiment in its own right.

The website provides an example. The website you see today is not the website that was ready for launch on August 28, 2014. The original website proved incapable to accommodate – both technically and conceptually – the Comedy of Things output. A number of us felt that the Comedy of Things deserved better; that we should not give away to the urgency and pressure to publish our results; that the web could and should be something more than a digital exhibition space, that it should be an integral part of the experiment itself, even if that required postponing its launch.

Or take the role of the ‘wild cards’: the museum curator, the performer, the artists. They were invited to disrupt our work, to challenge us to re-examine our progress. But in truth they played little more than a ‘facilitating’ role, especially in the case of the artists, who were vital in helping all groups manufacture our installations. Various people expressed discomfort with the situation, noting that it would have been more stimulating and generative to have Freyja and Arnar work with rather than for us. In fact, over the course of the week a number of people developed close relationships with Freyja and Arnar, opening up directions for possible future collaborative work.

The very futurity of the experiment provides my last example. The days spent at Tisvildeleje were jovial, controversial, indulgent, intense, agonistic, cathartic, and as George Marcus put it to me, “a strange contemporary rehearsal of Durkheimian communitas”. But this perception of communitas provoked ambivalence and concern. Some people expressed serious doubts as to what the whole purpose of the exercise was. They felt the experience of communitas ran too close to sheer self-indulgence, and worried about what (say) future auditors might have to say about our cosy little experiment in an increasingly austere political economy.

Thus, in these terms, it proved difficult to appreciate how much of the relational space we were clearing up was experimental and how much was experiential, notwithstanding that the spilling of one over the other might be signalling the very location of anthropological concept-work that we were looking for.

As it turns out, over the following weeks the confusion, fears and uncertainties proved particularly fruitful for thinking through the nature of the experiment. In my own case, in a number of conversations with Morten Pedersen we observed that an aspect worth considering was not just what the Comedy of Things had accomplished, but what it had enabled for future accomplishment. We came to realize that beyond the event itself – beyond the week-long workshop – there was scope to think of the Comedy of Things as a sort of anthropological prototype: a methodology and an infrastructure, a machine for concept-work, but also an experience and social form, an intuition and excitement for the promises of collaboration. The Comedy of Things as a creative un/commons.

The sustenance of this anthropological prototype, however, calls for very different resources than those traditionally mobilized by the Boylean experiment. It has demanded a singular inventiveness in the design of novel spatial and pedagogical forms (at the Museum of National History in Oslo), of documentary registers (for instance, the new website, as well as the afterlife of commentaries, reflections or social media interventions offered by participants), of collaborative and relational exchanges (in the iterations and bifurcations of the original event that have seen the light since), and of infrastructural equipment. The very licensing of the whole website with a Creative Commons license came as an afterthought to the workshop itself, and nicely captures the project’s re-description as a pedagogical, collaborative, infrastructural and commons vision.

The title of my post comes from a recent Nick Cave song, one of whose stanzas goes like this:

It took physicists close to 50 years to find evidence for the existence of the Higgs boson. I am proud to be part of an intellectual project (anthropology and/of the Comedy of Things) that is committed to sounding out a new tune for the Higgs boson blues.