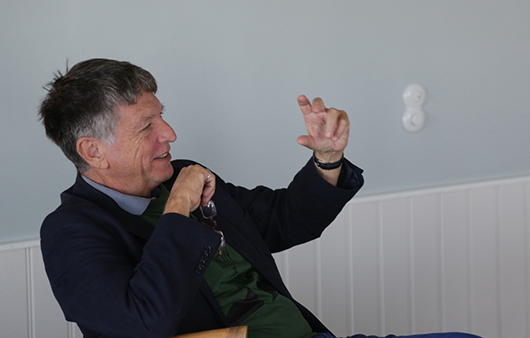 I make these initial comments (1) as a reaction to  a wonderful conversation I had with Morten Nielsen on a stroll at Moesgaard about a month after our   CoT week, when he explained to me  your ideas and rationales in designing and conducting our project, and  (2) as notes I took on reading about two  weeks  ago  your  jointly composed essay, essentially explaining on paper, what  I had learned from Morten during our walk.

(1) In retrospect, I am wondering how effective it was to keep us all so much ‘in the dark’ since from your essay and my conversations  with you, you had very specific references  and ideas  in mind. There was indeed quite a bit of ‘theory’ and desire behind the design. Knowing a bit more of it would have been helpful–at least  in my case. How, and  how much, to disclose is itself an art.

(2) There were also certain assumptions operating  about what the subject as anthropologist is  like–shared ethos, shared knowledge, anthropologist as ‘out of the box’ thinker–as the primary operating identity of those who were participating. In particular, knowledge of anthropological theories of myth was presumed.

(3) There were no spectators for what we were doing except ourselves in our divided parallel groups   The ‘wild cards’ did not function as
spectators or a stand-in public for us –in fact for the most performative one, we collectively were  an attentive public.

(4) “Totemic dialogue” seemed to be a key kind of  ‘theory  or operator of the case’. But really was it in play?

(5) You open by saying “The Comedy of  Things was an anthropological experiment  on anthropology itself conducted by , with and on anthropologists (anything else would  have been unethical).” Why, and  what alternative would  have been, unethical??  The  parenthetical seems absolutely critical to me. This  seemed to both limit and close off possibility–it in effect  set  the boundaries for the project, much more explicitly than I had supposed  coming as participant told very little beforehand.  Are we talking about the ethics of  anthropologists?
of artists? of  friends and comrades? More on this below…

There was an investment in a certain sort of ethos of the anthropologist…as ideal intellectual, as artist or not? To reverse Hal Foster’s 1995 essay title, “The Ethnographer As Artist?” I sensed quite a bit of resistance to such an identification, even though we were seemingly placed in this position. The Icelanders, I noticed, were amused–in their way.

I think not, as well,  but in terms of  historic avant-gardes, ‘chance’ (a  la John Cage; the exquisite corpse of the surrelaists) seemed to be a more  important principle  of making than improvisation…but  this is  not how comics invent–timing, yes, but not  ‘chance’ over improv.

I guess I would judge  how good we were as kinds of comedians or producers of comedy by registering the level and quality of laughter that  I heard,separate from fellowship  and solidarity in a common endeavor. I have to say that  I didn’t hear or see much laughter that comedy elicits. From whom? An audience, spectatorship, or public for what we were doing on site– which we did not have and for which each group serving as spectators  of the  performance of the other  was not sufficient. What comes to mind is that very old Culture and  Personality essay that  Bateson wrote around the Naven ritual –where he said in American culture the children are exhibititionist, and the parents observers; in English culture the other way around–but the  dynamic of  Naven was precisely moieties playing the spectator/ exhibitionist roles for each other in a building process of ‘schismogenesis’.  This begins to resonate with what I observed at Helenekilde!.

In retrospect, those three cds were the most important predistributed artifacts  to think about.  I personally would liked to have had them earlier in the game, or yes, I admit, I would  have liked the sort of explanation of why we  were viewing them that you disclosed in  the essay, which  you have just circulated.  My  impression is that far too little attention was paid to them by the others. They were mentioned but not  much engaged with, when they were key clues  to what you were up to (‘your theory of the design’, so to speak).

So, why comedy ? and in what sense, comedy? Morten Nielsen revealed how  much he admired the agility and creativity of contemporary comics in the world of entertainment (e.g. Richard Pryor).  So to move in the direction of  the tropological history of Comedy (as  Nick and  I did) while it could  have been interesting was probably a diverting  move. You  literally had the skill of comics in mind.  But  comics  always anticipate, live or die by a  public , a presumed audience, even when there is  none, and they are playing only with one another.  In this sense, a resource for what we were doing relationally among ourselves with the comic (like  Pryor and others) in mind is the 2005  film The Aristocrats (which precisely parallels within the ‘inside’ world of comedians what we were trying to do creatively in the inside world  of anthropologists).

But really, these are quibbles for certain discomforts, which were, after  all, very much the  point amid all that  comfort, luxury, and true comraderie of those days.  Indeed, it is  as yet impossible  (at least for me) to render any sort of  coherent account of those days together –what they might mean– that possibility is  potential, is  in the future ,as what we made  is subject to the seeing, experiencing, and discourses  that arise in places where  ‘art’ and ‘artifacts’ are curated.  That is the point–the story of what we did  can’t yet be told.

A comment on my own group  …it got too textual too quickly and for too long. I was overwhelmed  by the structuralist assimilation of stories, which in my case, did not do justice to the  things I/we brought.   Nick and  I writing  a dialogue (a pretty interesting one) in the context of what others were doing was  like  Rosencrantz and Guildenstern flipping coins a la Tom Stoppard. We made that kind  of space amid the industry of anthropologists being  other  than scholars.

Let’s see how things turn out….