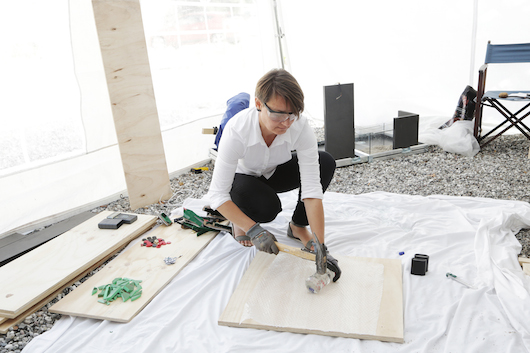 I take writing this comment as a chance to reflect on the task we were given to make an exhibition as part of the Comedy of Things. Making an exhibition was premised on the assumption that new anthropological insight might be gained by setting a constraining scene for playful engagement with things (some of these constraints are described in the ‘about’ section). Indeed, the Comedy of Things can be described as a set-up for experimenting with re-articulations of the relations we conventionally believe we have with objects, artifacts, materials – the stuff of the world. I find the experiment successful in this regard, because it achieved such articulation. In the process of making the exhibition some of the objects that were part of ‘group four’ demonstrated a curious capacity to transport us, the experimenters, back into the worlds from where the objects had been taken.

Let me first briefly sketch out the general procedure. We had each been invited to bring with us two objects, one from our ‘primary site of origin’ and one from our ‘primary site of field work.’ We were told to deploy a ‘totemic method’ developed by Morten and Morten as a way of working with these objects. The totemic method prescribed a playful engagement with objects that would pair the objects and observe the pairing as we went to see if a pattern would emerge. Based on what we could remember from Morten Nielsen’s run through of the method, we tried it out using the materiality of the object as our guide for pairing (clay with clay, nylon with other textiles, glass with glass, rubber with rubber). But we soon encountered certain analytical blockages. Not least among these was the following problem: even if we were able to associate our wildly different objects, what would those relations be expressions of? Having no theory for solving this conundrum, we developed a practice of ‘moving juxtaposition’: we simply moved the objects around until we were able to envision some kind of relation between them. This procedure eventually allowed us to produce a tableau that we called “Fox and Fieldworker.” (see exhibition box four, section ‘exhibition’).

I’m embarrassed to admit that I felt distinctly uncomfortable in this situation where the method so tangibly emerged together with the objects forming relations. To alleviate this unease, I came up with the idea that we could split the group in two. Half of the group would observe the other half as they struggled to relate the objects, first inside the hotel and later in Freya and Arnar’s design space.

Although we did not know precisely what to do and how to do it, we slowly found a way through (and I should mention that this did not happen as an effect of the attempt to control the process through observation and note taking). Gradually relations were indeed formed among the materials. Some objects acquired a certain prominence while others moved silently into the background (we were not sure why and the experimental setup did not really enable us to think through this). Nevertheless, this was a rather pleasant process, and we felt more or less in control. Indeed, after a while we came up with a product.

In the end, we had produced a tableau and a peculiar but somewhat evocative title that might be taken to hint at an underlying myth. Yet the lack of a narrative that interwove our materials made the operation random and the result seem rather naïve. Because the objects did not belong together in any obvious sense everything could be made to fit everything else. Although what we had produced was rather ugly, in our pursuit of knowledge this particular constellation has gained a “positive inflection” (Strathern 2014: 7). Paraphrasing Marilyn Strathern (1996, 2014), we might thus say that this process was testimony to the fact that relations release certain capacities and do things. Yet that observation was of little assistance when it came to addressing another question: why on earth should that be considered an interesting or good thing.

Soon enough our comfort turned to discomfort. After all our efforts would be put on public display. We decided we could not serve our monster up to the public and decided to destroy it before it was too late. Curiously, however, we had all felt some sort of affinity with the ‘thing’ we had made. This led us to define a new methodological principle: we would have to destroy the monster we had created with care. This principle may have evolved in anticipation of the relations that were to form, rather than as an effect of our relation with ‘Fox and Fieldworker’, but that may be pure speculation. In practical terms ‘destruction with care’ implied that we would indeed destroy every single object, but we would do so with a keen eye to its materiality. At least the materials should be involved in determining the process of their elimination.

Compared to building the tableau, destroying it was a much more mechanic process. In one of the video clippings that document our process (see Box 4, this web site), Ben describes the lack of pleasure he experienced when committing to such ‘reverse archeology’. Indeed, in contrast with the hopeful naiveté that characterized the making of the tableau, our ‘creation through destruction’ had a deeply bureaucratic aspect: Since we have decided to destroy, we shall carry through. Quickly, the anticipated empathy for the objects that informed the principle of destroying with care had been distorted into procedural meticulousness. Ben bears witness to this transformation: the principle became ugly (just like the monster it was invoked to destroy), “it made me feel quite sick, wanton destruction”.

But as we meticulously engaged in tearing, breaking, cutting and sawing, we were in for a surprise: The objects began to demonstrate their value. The Mongolian bear pipe that Morten had received as a gift many years ago suddenly pressed upon him its ‘giftness’ (this pipe ended up being re-giftet). The sandals that Anne Line had purchased in Brazil and in Denmark came to life as she remembered their economic value (the sandals suddenly were “good sandals”). Ben hesitated at having to break the reconstruction of a prehistoric pot from Tucumán as breaking it made him remember the costs and the difficulties of going to the field site. And Matt expressed concerns about smashing a Psion Organizer-II, a portable computer that the Kalahari scientists would find at once retro and very useful for documenting meerkat behavior.

From the outset the selection of these objects had been complicated by the lack of guiding criteria. What objects to bring to the Comedy of Things? There were so many to choose from? In our different ways we had solved this problem by a process of imaginative recall of what our places of origin and our field sites were like. All of us had also thought about how these objects would perform as representatives of faraway worlds when transported to a hotel on the Danish coast. We had not brought them along to be destroyed. Yet, whereas the process of destruction succeeded in wiping them out, it also succeeded in bringing to new life the worlds from which they had come.

I have not yet told you about my object. In destroying this object with care, I came to see that it had actually been destroyed long ago. The object I had brought along was a wave captured in a jam jar. This seemed a suitable object, since I work among innovators who design and develop technological devices and infrastructures for capturing ocean waves to transform them into renewable energy. Smashing the jar with a hammer and seeing the water disappear into the gravel on the floor of the design space, taught me something new about waves: they cannot survive capture. If there is any ontology to waves it is surely only of movement and flow. Realizing that the wave had already been destroyed at the moment of capture made me wonder anew about the relations of energy engineers and waves. And wonder turned into analytical puzzlement: How to capture movement without stopping it? In developing technologies to harness energy from ocean waves, physics certainly helps. But what about metaphysics? 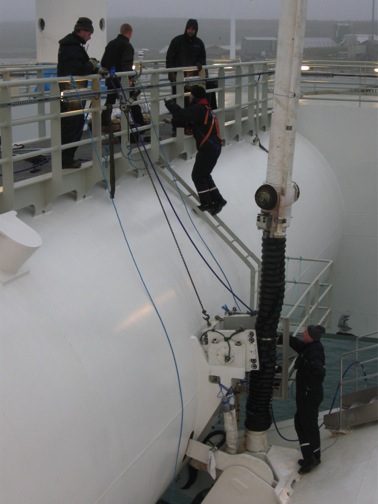 As I said at the beginning, I think of the Comedy of Things as an experiment in how to ally with objects in such a way as to expand our own registers for seeing worlds. Comedy has thus enabled me to rethink energy worlds. Conversely, it might also help energize anthropology.

However, although our experimental tinkering with objects was comic it obviously did not create a passage into the world of comedy. On the back of Alberto’s comment that the Comedy of Things might set new standards for anthropological knowledge making in the future, I would like to suggest that energizing anthropology through new standards depends on further experimenting with our forms of experimentation. With rules: as exemplified by our systematic, yet unwanted process of destruction. With bodies: as in the various choreographies that emerged (in contrast to moving objects around, the bodily choreographies were much harder to document). And with forms of witnessing: Comedy of Things adds to the conventional repertoires of anthropological presentation through the exhibition, the web site and the comments and practices they instigate. Further experimentation in these multiple registers might help anthropology know how and what it is that it knows.

Afterthought: Destroying the objects from our ‘primary site of origin’ did not seem to have the capacity to create a passage or rearticulate what those sites were like. Perhaps we were simply not able to enter this territory and be vocal about such passages. Or, which is more likely to be the case, rearticulating these worlds needed other methods than destroying with care.