This is a narrative 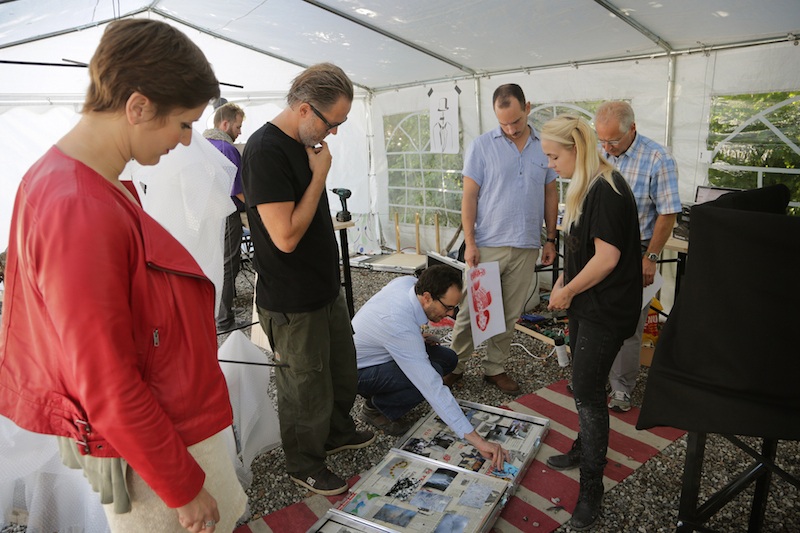 So: five artefactual sets. Each is imbued with a kind of history and energy by their individual creators. What is communicated to others to whom these are new objects, objects without connotation—without history and biography? The objects may possess a denotation that is legible—‘This is a DVD of an American stand-up comedian; it is meant to be humorous’; ‘This is a set of newspaper cuttings from Mozambique’—but the connotations are hidden from those who have not created the assemblages and brought them here.

And yet: The five people begin to allow themselves to seek out connexions, or affordances, between themselves as speakers, as bodies, as bringers of artefacts. They open themselves up to one another. It is a form of generosity, a form of confidence, a form of friendship, even a form of new beginning, transcendence, liberation, purification. They ask: what connexions can be seen to exist here? What contingencies can be seen serendipitously to emerge? The five people enable effects to become felt and visible between or among themselves. A certain slippage occurs. Whether out of frustration, tiredness or a certain fruitful absentmindedness, the five people lose sight of whether the new ideas and concepts arise out of bits of text or bits of gestures or bits of voicings or bits of memories. Their ongoing engagement with one another, with the artefacts and the texts, seem even momentarily to bracket-off the distinctions between themselves, also between things, concepts and texts.

What kind of between-ness or among-ness is this? It is not an integration. It is not a homogenizing. It is not a generalizing. It is not an averaging. The connexions concern journeys and the journeys entail passages. The five people juxtapose their bodies, their histories, their sets of artefacts against one another’s. And they effect journeys across. They find bridges—or affordances—by which one person and one history and one artefact or set of artefacts can be seen or felt or heard or said or conceptualized or otherwise experienced as connecting with another or others.

What is the effect of this juxtaposition, of this journeying between discrete people and histories and objects? The passageways made between also effect a moving forward, a progression. The oscillation or sideways shuttling is actually a zigzagging. You might think this is a description of a Hegelian dialectic: from ‘thesis’ to ‘antithesis’ to ‘synthesis’. But this is not Hegelian. Each element that is juxtaposed retains its integrity. And yet the experience of connecting the two (or more) discretenesses moves the experiencer forward. The shape is like the marks left behind by a snake in sand. Why should this be the case? Why should a sideways or oscillating movement between juxtaposed objects lead to an experience of progression? Because life is a journey of personal ontogeny. Each human being is set on a life-journey that has one direction: a moving on that is cumulative, that is non-reversible, that is gradational—a growing by way of steps—and that is a growth that is also a decay. Memory is fallible. The machinery of consciousness and embodiment is finite. We move forward in our being and our knowing but we also move towards death and putrefaction.

Where has this brought us? What have we discovered through and between ourselves?

THIS:
Anthropological knowing has a shape to it.
It is a movement between discrete objects—individual people, histories, consciousnesses, artefacts, in a word materiel—that is also a moving forward of experience.

There is a grammar to anthropological knowing, comprising terms, and the syntax that tells how to use and combine those terms. Here is our grammar:

The above is an honest narrative. It describes a discovery of anthropological method with neither a priori nor a posteriori elements. We cannot prove this.

There is no absolute return in life but there is always the choice of life. Anthropology is the study of effects that energetic things-in-the-world (people on their life-paths, with their life-ways and their life-projects (their artefacts)) have upon one another.