Ghosting the Rite of Return 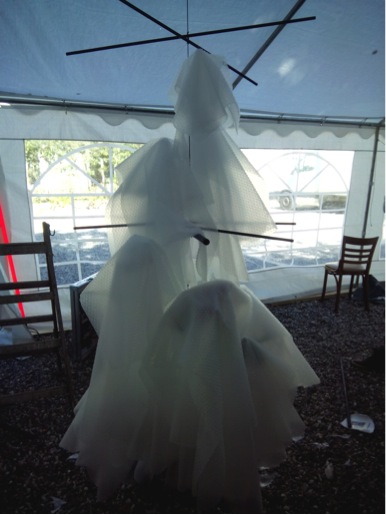 We offer here some reflections on the thought-process that animated the design of our installation.

We offer these reflections in the spirit of the same aesthetic register that shaped the installation piece: We are working in awareness of ourselves as an installation, too.

We have called this brief reflexive essay “Ghosting the Rite of Return”. For the conversation lays out a set of themes haunting both our work and anthropological discourse more generally – returning to anthropology as a limit-testing endeavor. Rehearsing classical themes of anthropological scholarship – gift-giving, sacrifice, rebirth, cosmology, and so forth – we have re-discovered anthropology not as a bounded discipline, but as an installation.

Ours is a return to the question: What are the limits of the anthropological project? What “home” does anthropology return to as a site of practice: a laboratory, a museum, the remote fieldsite, the conventions of a theoretical tradition, the experiment afforded by a revelation of itself as an installation project?

We found ourselves formatting these reflections as a conversation between the members of the group:

D: We should try to unpack the design of an installation as the installation of ourselves as a design project, too.

R: We have thought at different points about the installation as a “Ghost Bride”. Ghosts are often said to everse the body-soul connection, such that the soul lies on the outside and the body is inside.

K: There is a clear connection between our output – the Ghost Bride – and our working mode. What makes our collaborative effort “ghostly”? How have our bodies “everted out” into the spectral body of the Ghost Bride?

R: The collective has figured itself into the installation – that is our aesthetics.

T: We have submitted to the process.

D: Certainly. Yet it is has been a purposeful submission.

D: There is this notion of bio-energetic analysis: there is a professoriate of armouring that must be broken down or broken through in order to generate a collective release. This bio-energetic has informed… in our case, it offers a useful resource to think of our work in terms of a bio-energetic of anthropological productivity.

A: This is tricky, because our collaboration has been very productive, we are hyped on our productivity, but we should avoid falling for a commentary on our self-enchantment.

A: This is an important point – the question of incest, how we enter that world, what desires and affects energize that form of incest and attachment. Because in order for us to attach ourselves so productively to each other these past days, we had first to invest ourselves – as well as the materials and objects we brought to the workshop – with a sense of liberation. How were the materials liberated, when did that liberation begin? For example, we were initially very careful with what we did to the objects. We felt uncomfortable piercing the objects with a needle. Yet in other cases, we had no problem in letting go of the materials. When did that process of liberation begin for each object?

T: It has all been about sacrifice, about what we were each willing to sacrifice – our objects, and the relations contained therein – for the installation.

D: This was a bit tricky for me. Because one of my objects was a gift, and how could I part from a gift without sacrificing the relationship that that gift contains? How can I re-gift to the Ghost Bride something that is not mine alone to regift?

R: We set ourselves the task of creating an ontology – a world-making project. We started by creating that consciously. Yet suddenly it took a form that was no longer the result of our labor. We brought something of ourselves that was consumed by the Ghost Bride – her body was literally created through the parts we sacrificed.

K: The decision to cover-up the objects may have facilitated that process of parting ways with an object.

T: What also happened is that, because the artifacts were covered-up, the objects were sort of flattened out – meaning that no quality of an object was foregrounded relative to the qualities of another object. They allowed themselves to gain importance for us all. The objects came to us as equals.

D: We allowed each and every object to stand in for all the others. So my question is, what was happening there, as the helmet, then, came to stand in for other objects, and for ourselves? We made a tacit decision not to problematize attachment and detachment, and to substitute for that a form of resonance.

R: When we decided to cut the objects free, that was a crucial point.

D: What was it that the Ghost Bride was doing that this group was also doing? Which moments articulated, perhaps proximally, the tension that that released?

D: Not sure about the individuals part. Perhaps we should say that it was displaced in a subjunctive mode: “as if” the myth sacrificed itself for us.

A: We are entering a very interesting aesthetic and theoretical language: sacrifice, gifting, liminal change and myth-making. There is a sense, then, in which our group moved very quickly through the “rites of passage” of anthropological knowledge-making. We pushed our own anthropological project into that space.

D: Yes, rites of passage: 1. Disaggregation, 2. Liminality, 3. Reaggregation. But perhaps we are missing a fourth element – what Crapanzano called the “rite of return”. So he observed how, although “politically” ascribed with the capacities of full-status adults, former initiates where he worked were always subjected to on-going ritual work. There was a rite of return that marked how a person has to return to the place he has departed from, but changed.

If we are returning to the ancestral values of our discipline, we can only do that by re-inventing the wheel differently. In our case, we have dis-allowed the personal any kind of purchase.

R: It was a weird day, the first day that we met, because we began our cosmological project straight away. Where to place this first day – what happened then that does not belong to the rite? Was it a leap of faith?

A: Could it be that a misunderstanding in fact put us on the right track? We were led to think that whatever we came up with on that first day would be uploaded on the website. We thus entered a cosmological project, a world-making project by mistake.